In Chapter 6, we presented a model-agnostic approach to the calculation of the attribution of an explanatory variable to a model’s predictions. However, for some models, like models with interactions, the results of the method introduced in Chapter 6 depend on the ordering of the explanatory variables that are used in computations.

In this chapter, we present an algorithm that addresses the issue. In particular, the algorithm identifies interactions between pairs of variables and takes them into account when constructing break-down (BD) plots. In our presentation, we focus on pairwise interactions that involve pairs of explanatory variables, but the algorithm can be easily extended to interactions involving a larger number of variables.

Interaction (deviation from additivity) means that the effect of an explanatory variable depends on the value(s) of other variable(s). To illustrate such a situation, we use the Titanic dataset (see Section 4.1). For the sake of simplicity, we consider only two variables, age and class. Age is a continuous variable, but we will use a dichotomized version of it, with two levels: boys (0-16 years old) and adults (17+ years old). Also, for class, we will consider just “2nd class” and “other”.

Thus, by considering the effects of class and age in a different order, we get very different attributions (contributions attributed to the variables). This is because there is an interaction: the effect of class depends on age and vice versa. In particular, from Table 7.1 we could conclude that the overall effect of the second class is negative ( \(-7\) percentage points), as it decreases the probability of survival from 20.5% to 13.5%. On the other hand, the overall effect of being a boy is positive (\(+20.2\) percentage points), as it increases the probability of survival from 20.5% to 40.7%. Based on those effects, we would expect a probability of \(20.5\% - 7\% + 20.2\% = 33.7\%\) for a boy in the second class. However, the observed proportion of survivors is much higher, 91.7%. The difference \(91.7\% - 33.7\% = 58\%\) is the interaction effect. We can interpret it as an additional effect of the second class specific for boys, or as an additional effect of being a boy for the male passengers travelling in the second class.

The example illustrates that interactions complicate the evaluation of the importance of explanatory variables with respect to a model’s predictions. In the next section, we present an algorithm that allows including interactions in the BD plots.

Identification of interactions in the model is performed in three steps (Gosiewska and Biecek 2019):

Based on the ordering of the rows in Table 7.2, the following sequence of variables is identified as informative:

Figure 7.1 presents the interaction-break-down (iBD) plot corresponding to the results shown in Table 7.3. The interaction between fare and class variables is included in the plot as a single bar. As the effects of these two variables cannot be disentangled, the plot uses just that single bar to represent the contribution of both variables. Table 7.2 indicates that class alone would increase the mean prediction by 0.185, while fare would increase the mean prediction by 0.143. However, taken together, they increase the average prediction only by 0.098. A possible explanation of this negative interaction could be that, while the ticket fare of 72 is high on average, it is actually below the median when the first-class passengers are considered. Thus, if first-class passengers with “cheaper” tickets, as Johnny D, were, for instance, placed in cabins that made it more difficult to reach a lifeboat, this could lead to lower chances of survival as compared to other passengers from the same class (though the chances could be still higher as compared to passengers from other, lower travel classes). 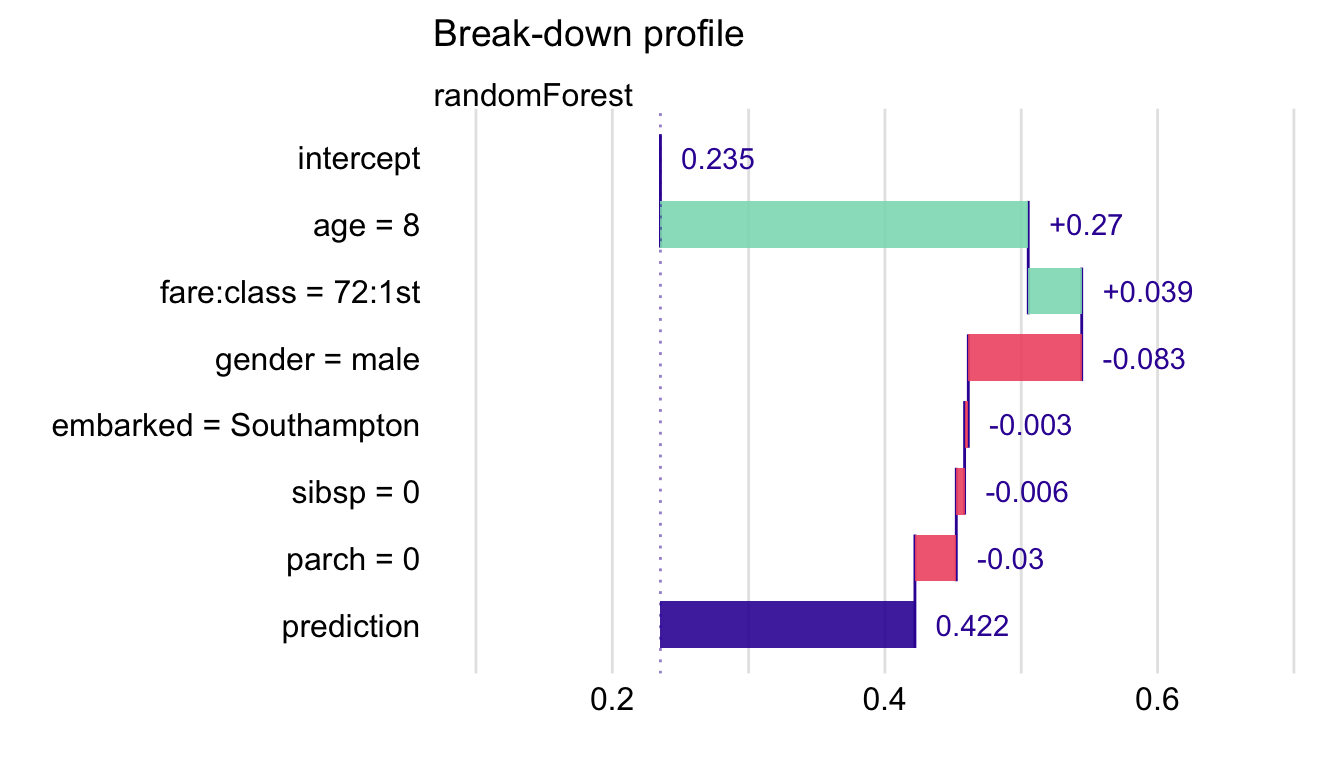 Figure 7.1: Break-down plot with interactions for the random forest model and Johnny D for the Titanic data.

Though the numerical complexity of the iBD procedure is quadratic, it may be time-consuming in case of models with a large number of explanatory variables. For a model with \(p\) explanatory variables, we have got to calculate \(p*(p+1)/2\) net contributions for single variables and pairs of variables. For datasets with a small number of observations, the calculations of the net contributions will be subject to a larger variability and, therefore, larger randomness in the ranking of the contributions.

It is also worth noting that the presented procedure of identification of interactions is not based on any formal statistical-significance test. Thus, the procedure may lead to false-positive findings and, especially for small sample sizes, false-negative errors.

In this section, we use the DALEX package, which is a wrapper for iBreakDown R package. The package covers all methods presented in this chapter. It is available on CRAN and GitHub.

For illustration purposes, we use the titanic_rf random forest model for the Titanic data developed in Section 4.2.2. Recall that the model is constructed to predict the probability of survival for passengers of Titanic. Instance-level explanations are calculated for Henry, a 47-year-old passenger that travelled in the first class (see Section 4.2.5).

First, we retrieve the titanic_rf model-object and the data for Henry via the archivist hooks, as listed in Section 4.2.7. We also retrieve the version of the titanic data with imputed missing values.

The key function to construct iBD plots is the DALEX::predict_parts() function. The use of the function has already been explained in Section 6.6. In order to perform calculations that allow obtaining iBD plots, the required argument is type = "break_down_interactions".

We can compare the obtained variable-importance measures to those reported for Johnny D in Table 7.3. For Henry, the most important positive contribution comes from class, while for Johnny D it is age. Interestingly, for Henry, a positive contribution of the interaction between embarked harbour and fare is found. For Johnny D, a different interaction was identified: for fare and class. Finding an explanation for this difference is not straightforward. In any case, in those two instances, the contribution of fare appears to be modified by effects of other variable(s), i.e., its effect is not purely additive.

By applying the generic plot() function to the object created by the DALEX::predict_parts() function we obtain the iBD plot. 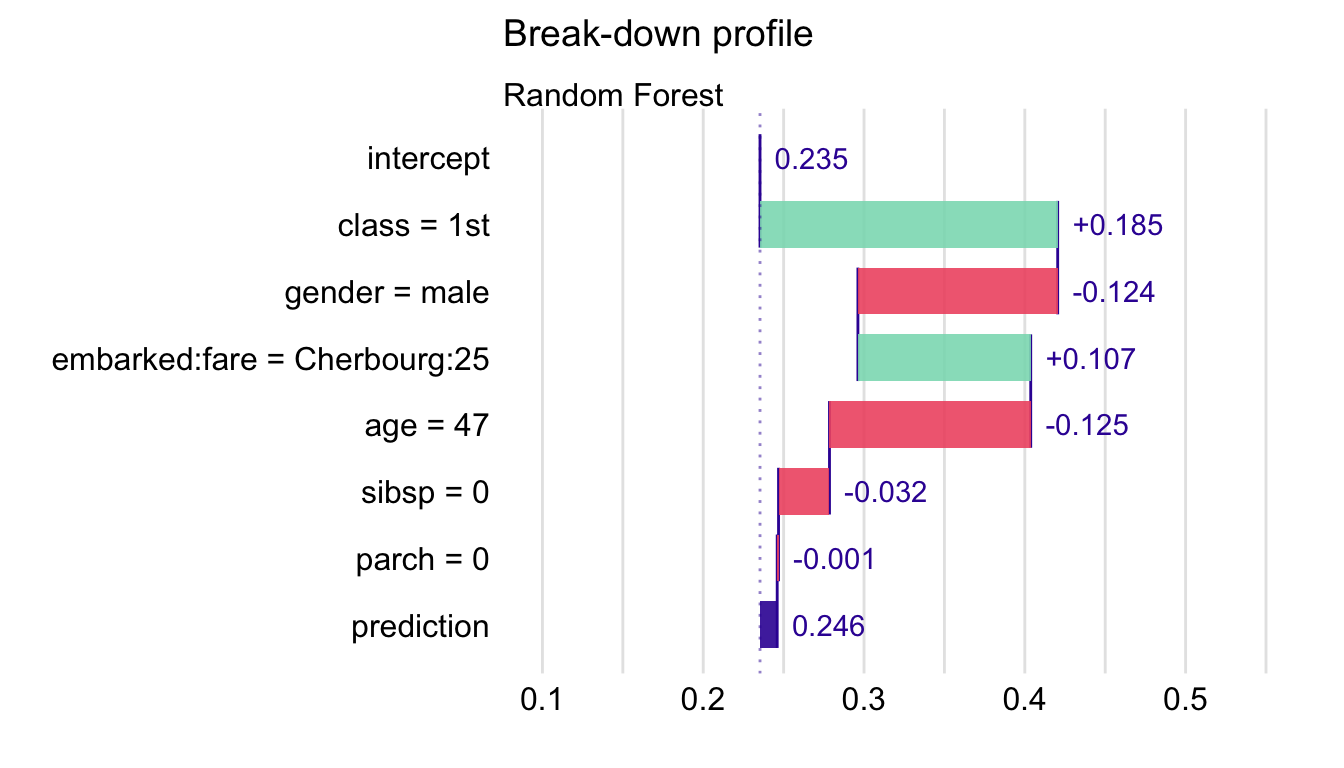 Figure 7.2: Break-down plot with interactions for the random forest model and Henry for the Titanic data, obtained by applying the generic plot() function in R.

In this section, we use the dalex library for Python. The package covers all methods presented in this chapter. It is available on pip and GitHub.

For illustration purposes, we use the titanic_rf random forest model for the Titanic data developed in Section 4.3.2. Instance-level explanations are calculated for Henry, a 47-year-old passenger that travelled in the first class (see Section 4.3.5).

In the first step, we create an explainer-object that provides a uniform interface for the predictive model. We use the Explainer() constructor for this purpose (see Section 4.3.6).

Interactions are often weak and their net effects are not larger than the contributions of individual variables. If we would like to increase our preference for interactions, we can use the interaction_preference argument. The default value of \(1\) means no preference, while larger values indicate a larger preference. Results are stored in the result field.

By applying the plot() method to the resulting object, we construct the corresponding iBD plot.

The resulting plot for Henry is shown in Figure 7.3. 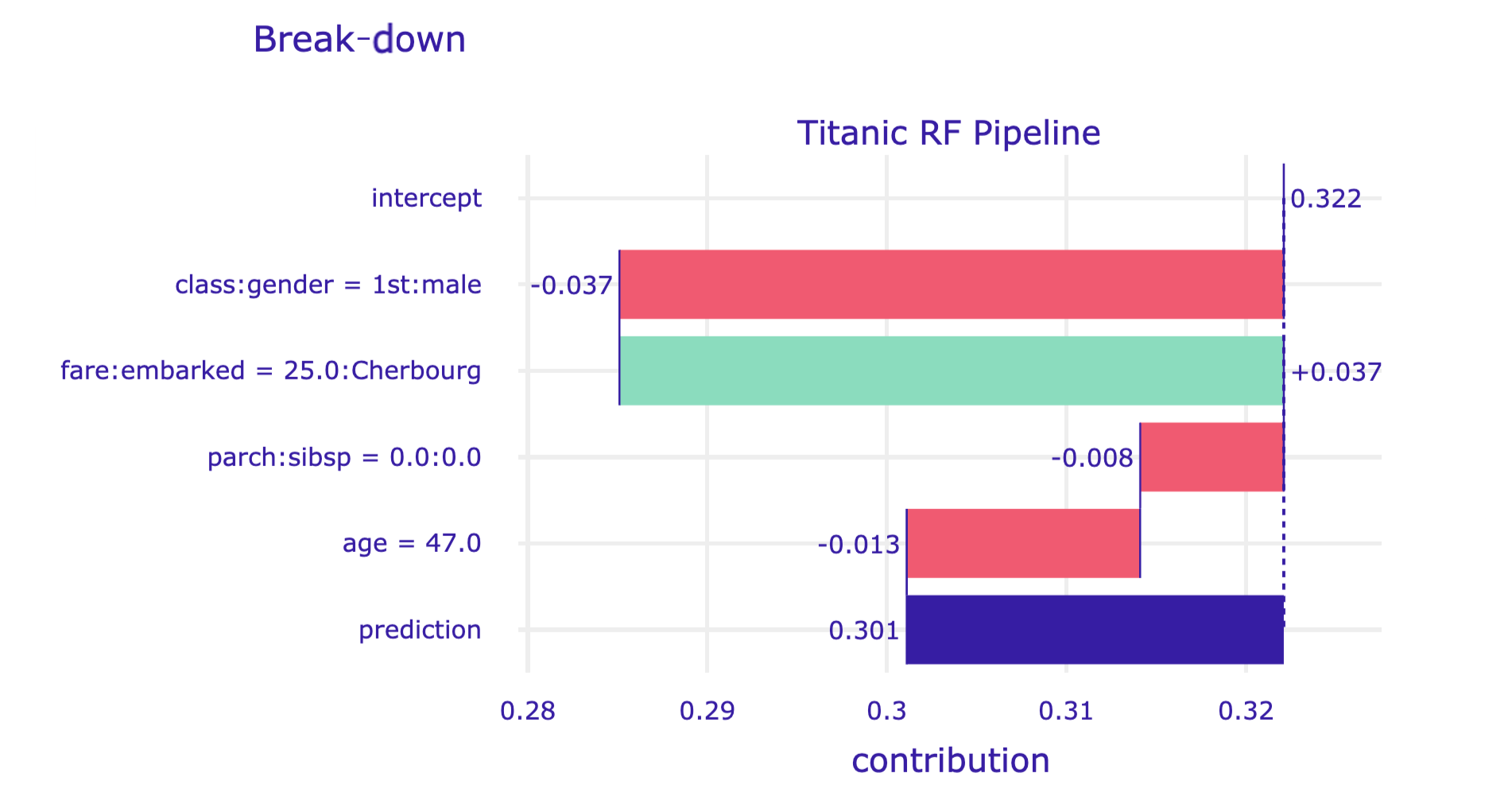 Figure 7.3: Break-down plot with interactions for the random forest model and Henry for the Titanic data, obtained by applying the plot() method in Python.